Skip to Content
Home Posts England Monsal Trail Cycling: Things to do in the Peak District
by 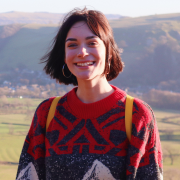 The Monsal Trail is a beautiful trail in the Peak District National Park which follows a section of the old Manchester, Buxton, Matlock and Midland Junction Railway, which closed in 1968. The Monsal Trail opened in 1981.

Where is the Monsal Trail?

Found in the Derbsyhire Peak District, the trail stretches from Wye Dale to Coombs Road, which is about 1 mile outside of Bakewell. The Monsal Trail follows the valley of the River Wye so there are some incredible views, as well as several landmarks and six tunnels along the way.

Check out some other great spots to explore in the Peak District.

How long is the Monsal Trail?

A great place to park to access the Monsal Trail is at Hassop Station. There’s a pay and display car park where you can leave your car for the day. Hassop Station has toilets, a café and bike hire.

Click here for a google maps pin for Hassop Station

As it’s a former railway line, the trail is very flat and therefore Monsal Trail cycling is a very popular activity, as well as walking, running and horse riding. If you are taking your own bike, make sure you have a helmet and bike lights, as there are tunnels along the trail. Although the tunnels are usually lit it is worthwhile having your own lights.

If you don’t have a bike that isn’t a problem. You can hire a bike from Hassop Station, which is at Hassop Station car park. Cycle hire is open here 9-5 daily.

How difficult is cycling the Monsal Trail?

As the Monsal Trail is a flat route, it is an easy cycle. There’s plenty of opportunities to stop on the way at public toilets, picnic areas and cafes too.

The route I took was from Hassop to Bakewell, then from Bakewell to Wye Dale, then Wye Dale back to Hassop, which was 20.8 miles / 33.58km altogether.

How long does it take to cycle the Monsal Trail?

I’d allow a day trip to visit the Monsal Trail. Whilst it is a flat and relatively easy cycle, there are lots of spots to stop at along the way. You’ll want to give yourself the time to enjoy the experience and take in all the views.

If you are starting the Monsal Trail bike ride at Hassop Station, then I’d recommend heading to the end of the trail at Coombes Road first. It’s only around 2 miles to get here, which can be done quickly on the bike. You’ll pass the old Bakewell train station before reaching the end of the trail. From Coombes Road you can take the 1 mile cycle ride into Bakewell. Bakewell is a beautiful town and really worth a visit.

Don’t forget to head to the Old Original Bakewell Pudding Shop (what.3.words ///lousy.online.flow) and grab one of the OG bakewell puddings. A medium bakewell pudding is £5.95 (Sept 2020 prices), so no bargain but delicious and it would be rude not to when in Bakewell.

The origin of the Bakewell pudding is disputed, but the most popular story is that it was invented by accident. The story goes that in 1820 Mrs Greaves, a local landlady, left her cook some instructions for a jam tart. But the cook made an error and ended up making what came to be the Bakewell pudding. Since then many variations of the pudding have become popular, the most significant being the cherry Bakewell which has icing and a glace cherry on top.

After visiting Bakewell you can start the end of the Monsal Trail again, and begin completing the full route of from Coombes Road to Wye Dale.

There are six tunnels you’ll come across when cycling the Monsal Trail, the longest of which is Headstone Tunnel at 487m. Cycling through the tunnels can be difficult when the wind is blowing through them. The tunnels are usually well lit, but it is worth having lights on your bike.

These are the 6 tunnels along the Monsal Trail:

You come out of Headstone Tunnel onto the Headstone Viaduct– ///publish.grouping.breakfast. The viaduct crosses the River Wye was built by Midland Railways in 1863. It’s 91m long. You can walk down into the valley and see the viaduct from below. If you continue walking away from the viaduct along the river you come to the Monsal Dale weir (looks like a waterfall).

The best place to view the viaduct is from Monsal Head off the B6465 near the Monsal Head Hotel (///earth.crypt.trickling)

After admiring Monsal Head Viaduct, you’ll continue along the Monsal Trail and cycle though Cressbrook Dale. There’s some amazing views here and you can see across to Cressbrook Mill from the trail. The mill was operational from 1779 to 1965 and produced cotton for the lace industry.

The Refreshment Room (///tunes.endlessly.straws) is found in the old Millers Dale Station building, as well as some public toilets and a picnic area. So it’s a great place to stop off for a drink and snack break whilst you’re cycling the Monsal Trail. Millers Dale Station was operational from 1863 to 1967.

Not far from Millers Dale is the former East Buxton Lime Kilms (///allies.massive.paintings).These were in use from 1880-1944, when 50 tonnes of quicklime was produced here every day. Now they are home to wildlife and bats hibernate here in the winter.

Find out some more about East Buxton Lime

From the old lime kilns, it’s onwards on the Monsal Trail through Chee Dale nature reserve. You can hop off the trail here and find some stepping stones through the limestone gorge – ///filed.decide.landscape.

Then you come to the end of the trail at Wye Dale – ///washing.aware.fruits

I hope this post has inspired you to visit the Monsal Trail or helped you with planning your visit there. If you’re looking for some activities based in the Peak District area, make sure you add the Monsal Trail Cycling to the list.